In July and August 2017, Vital Sites had the opportunity to tour Quinn Chapel A.M.E. Church (912 W. Chestnut St.), historically the Chestnut Street Baptist Church, along with representatives from Louisville Metro, preservation professionals, and other interested parties. This historically significant church has been vacant for many years and is currently owned by the YMCA. An exterior wall in the rear building is experiencing structural issues, which was one reason the YMCA sought guidance regarding possible demolition of this portion.

Professionals on site during the tour suspected that the smaller, rear building might actually pre-date the main church sanctuary. Vital Sites assisted Louisville Metro with research regarding the church property to confirm this fact.

Finding the property on Sanborn fire insurance maps tells us quite a bit about the structures over time. What is known today as the rear building on the property (the building with the wall issue) is shown by itself on the 1876 map and again in 1884 (below, left). Historical newspaper articles from late March 1867 detail an expansion of the original building in 1866-67: “The old building was thirty-five feet wide and sixty-six feet deep. The walls were taken down and rebuilt, adding thirty feet to the width and about fifteen feet to the length of the church.” This footprint is approximately what exists today. 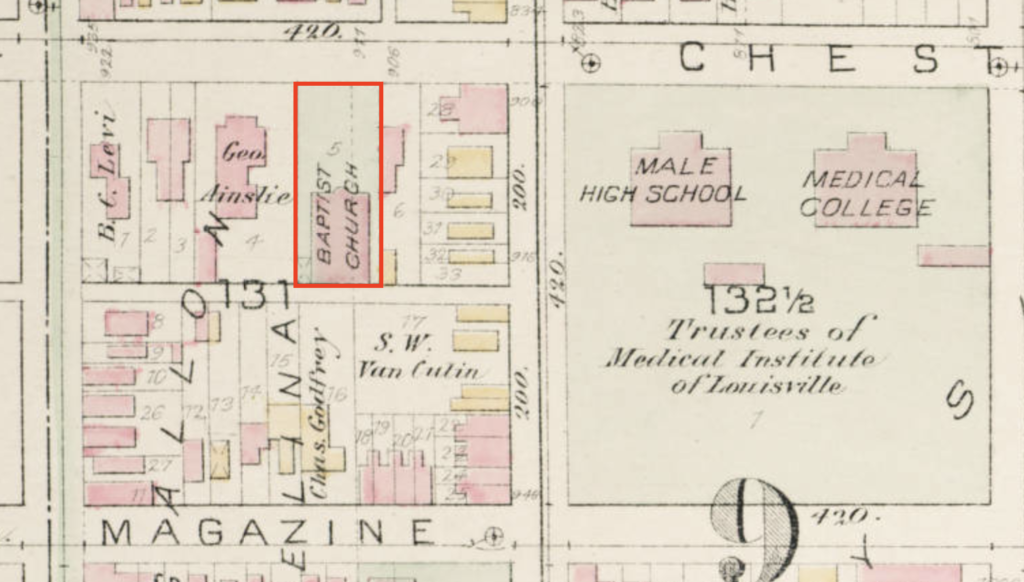 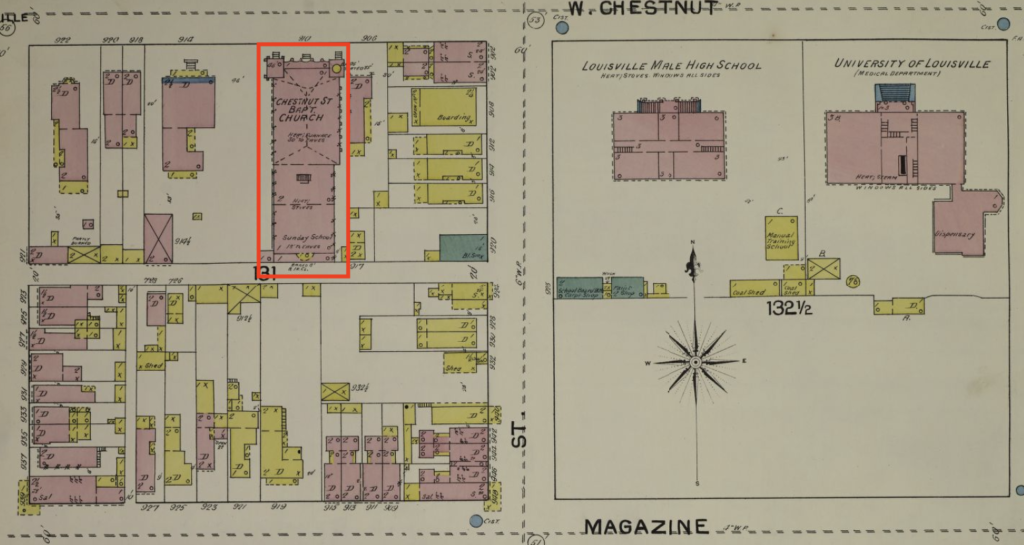 It’s not until the 1892 Sanborn map (above, right) that the main church building appears, clearly referred to as the Chestnut Street Baptist Church. News articles state that the church was dedicated in April 1886 and “twelve hundred people were packed in the splendid sanctuary”. The architects were Henry Wolters and Max Drach; it was described as a “model specimen of church architecture in this city.” The pastor, Rev. Dr. Joseph M.  Weaver, led the congregation for nearly 50 years before his death in 1913.

Historical newspaper research by Vital Sites showed that in early 1911, there were discussions regarding combining three Baptist church congregations, and that the Chestnut Street Baptist Church property would “be sold as soon as soon as a good offer is made for it.” The sale to the African Methodist Episcopal Church at Quinn Chapel took place in the summer of 1911. According to the National Register nomination form: “The Quinn Chapel congregation is one of the oldest black churches in the city… The church takes its name from Bishop Paul Quinn, an early black church leader and abolitionist and the first bishop of the African Methodist Episcopal faith to visit Kentucky.” The current congregation now meets at 1901 W. Muhammad Ali Blvd.

Rev. Martin Luther King, Jr. spent time in Louisville during the civil rights movement in the 1950s and1960s. He spoke at Quinn Chapel in 1961 (photo 6 in this Courier-Journal gallery shows King speaking at Quinn) and led open-housing marches in 1967. His younger brother, Rev. A. D. Williams King, had moved to Louisville in 1965 and was pastor at Zion Baptist Church.

In helping to seek new life for the church building, Vital Sites arranged for structural engineering firm BFMJ, Inc. to inspect the site and evaluate the exterior wall for stabilization. The firm agreed to make an in-kind donation for a portion of the consulting and report fees and Vital Sites provided the match. When a new grant opportunity came up through the National Trust for Historic Preservation – the African American Cultural Heritage Action Fund – Vital Sites notified the YMCA and shared the engineering report and photos from the inspection to assist with the application process in January 2018.

In fall 2017, Louisville Metro applied for a grant through the U.S. Department of the Interior and National Park Service to preserve sites that highlight stories related to African American civil rights. Vital Sites provided a letter of support for this grant application. On March 12, 2018, the National Park Service announced grant award recipients, and Louisville Metro’s grant application for Quinn Chapel’s stabilization ($450,000) was approved!