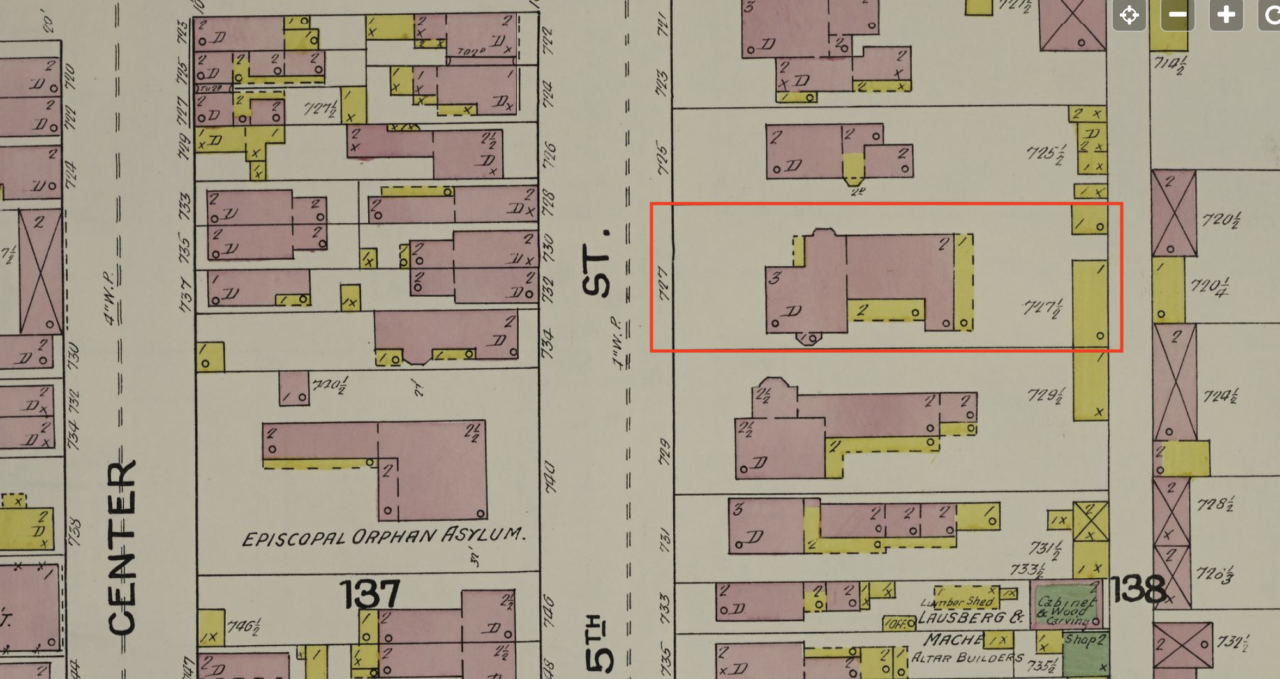 Welcome back! If you missed the first part, read here for a tiny lesson on city directories! Today, we’re talking about MAPS.

In these strange times, it’s nice to know that there is a wealth of information available online for research. You can check out one great Kentucky map collection at University of Louisville’s Digital Collections. It features 4 of some of the best atlases for researching in Louisville: 1876, 1879, 1884, and 1913. 3 of the 4 (all except 1879) are geo-referenced to help direct you to the map you need. Here’s a screenshot for the 1876 atlas, which you can access here:

Continuing with our example of the Brennan House, I can select the light orange block (1st column, second one down) and view the blocks around Broadway and 5th Street in 1876. It’s so interesting to note the density of the blocks and the sizes of some of the houses back then! The Brennan House is indicated in the red box below, with the property owner as F. S. J. Ronald, Heirs. It was built in 1868 for Francis S. J. Ronald, a tobacco merchant. The house was vacant for many years before the Brennan family bought it and moved in 1884.

The other atlases in that collection could also be explored to show the change in the surrounding neighborhoods over time.

Another map that can tell us a lot about buildings is the Sanborn Fire Insurance map. There are 3 volumes of the 1892 map of Louisville hosted on the Library of Congress website. Here’s a little bit about these informative maps:

“The maps depict more than 12,000 American towns and cities.  They show the size, shape and construction materials of dwellings, commercial buildings, factories and other structures.  They indicate both the names and width of streets, and show property boundaries and how individual buildings were used.  House and block numbers are identified.  They also show the location of water mains, fire alarm boxes and fire hydrants.”

The Brennan House is located on Map 81 of Volume 2. When we zoom in, we can see a lot of details about the house: the pink color means brick construction and the yellow color depicts wood construction. We can see how many stories there are in certain parts of the house, as well as outlines for defining architectural features like bay windows and porches. There were 2 wood outbuildings behind the Brennan House in 1892, and its old address of 727 S. 5th St. is indicated. This map shows the footprint of the house before the doctor’s office was added to the north side in 1912.

If you can find your house on an atlas or a Sanborn map, you can learn a lot about what it looked like and what the neighboring houses looked like. You can see the changes over time as you compare one map to another, as well as give you jumping off points for other research rabbit holes! Likewise, as we discussed in Part 1, you can use maps and city directories together to give you even more information including neighbors’ names and occupations.

Now take what you’ve learned so far in Parts 1 and 2 by heading to Part 3 on using the Courier-Journal Historical Newspaper Archive!